Most Expensive Celeb Manis Of All Time 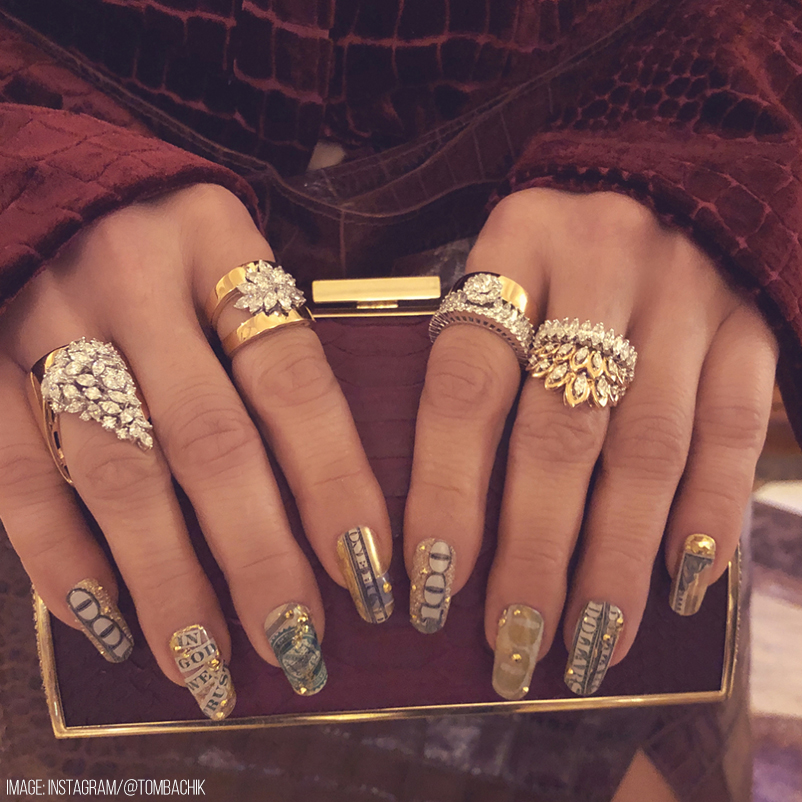 Going to the nail salon every two weeks adds up—fast! The average cost of a traditional manicure ranges from $20-$35, and if you go every two weeks, that adds up to $480-$840 a year, not including the additional cost of gel polish, nail art or enhancements. But, when it comes to pricey polish jobs, no one drops more dough than celebs. Whether they spend a couple hundred dollars or a couple hundred grand, Hollywood’s leading ladies know the value of a good manicure—and aren’t afraid to spend the money on it. Check out four of the most expensive celeb manicures in nail history.

While Ms. Lopez’s nails may be the least expensive of the bunch, the “Dinero” manicure that she sported at the 2018 American Music Awards was anything but budget-friendly. To create the costly look, A-list manicurist and Lopez’s long-time nail guru Tom Bachik cut up an actual $100 bill into pieces and used them as appliqués for the nails.

Supermodel Gigi Hadid may not wear nail art often, but when she does, she’s always a step ahead of the trends. Case in point: The chrome manicure she wore to the 2016 Met Gala. Inspired by the event’s “Manus x Machina: Fashion in The Age of Technology” theme, the futuristic-looking tips featured reflective chrome polish— a year before the chrome trend took off—and a hidden surprise: three crystals underneath each nail. While the look didn’t come cheap—the complete manicure cost about $2,000 to create—the end result was 100 percent worth it.

Brit pop star and “Fifty Shades Freed” actress Rita Ora may love experimenting with her tips, but it was the $56,000 manicure she sported at the 2014 MTV Video Music Awards that earned her the title of “nail art queen.” For the extravagant look, celebrity manicurist Barbara Warner polished Ora’s nails with Azature Ruby Diamond polish, a surprising affordable bright cherry-red hue, then added an extravagant finishing touch: tiny diamond spiders and red bow gems. The luxe embellishments cemented the lavish look as one of the most expensive manicures of all time.

Kelly Osbourne may be the “leader of the pack” when it comes to sumptuous manicures. At the 2012 Emmys, Osbourne donned a $250,000 diamond-infused nail polish. Thanks to A-list jeweler Azature, Osbourne’s shimmery obsidian lacquer contained 267 carats of actual black diamonds—securing the look as one of the most expensive red carpet paint jobs to date.

Stay tuned for even more nail inspiration and take a peek at these nail trends!