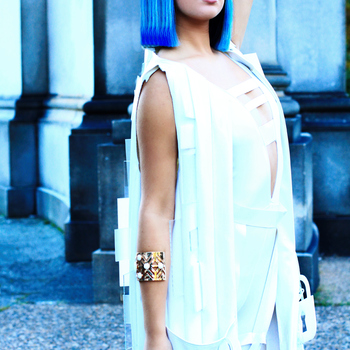 United States · Stylist
Michelle-Nichole brings over 15 years of experience in the beauty trade specializing in healthy hair care and extensions, haircuts, and color. She is extremely passionate about her craft and strives to bring the best the industry has to offer to each and every one of her clients. Michelle’s interest in hair began to bud when she had the thickest and most difficult to deal with hair and a mother who knew nothing about it. Deciding not to go to school looking outlandish, Michelle began to do her own tresses which led to her styling for her friends as well. Going to a boarding school, there was an abundance of friends whose hair she was able to style (a hair artist in the making). Against her parent’s wishes, Michelle-Nichole opted to go to school for cosmetology. From then on she has taken every step possible to get her closer to be one of the most sought after stylists in her area. Graduating at the top of her class, working in salons with great stylists, taking classes consistently, and soaking up as much as she could was most vital. In 2004, the salon she worked in, learned from, and competed in hair battles with closed its doors. At that moment, Michelle-Nichole decided to go into business for herself. Born and raised in the inner city of Philadelphia, PA, she had a mission to bring a salon of a higher caliber to the neighborhood she grew up in. “Why should we have to travel so far to receive the perks of a high end salon?” In that, Bounc’n & Behaving Hair Studio was born. She makes sure to give back to the community by providing “hair-overs” and other services with all proceeds benefiting research, treatment and education programs at City of Hope, and sponsoring events that help fight hunger in the Philadelphia region. Michelle-Nichole’s exposure to her first runway show peaked her interest to the fashion world which lead to editorial, runway, and celebrity hair artistry. Her work graced publications such as Vogue Italia, Coiffure Magazine, and Mazza International Hair Magazine. Backstage at runway shows such as Korto Momulu and Cory Tran Couture for New York Fashion Week is one of her greatest inclinations. She is also a contributive hairstylist for both Fall and Spring Philly Fashion Week as the Assistant Lead Hair Artist for designers such as Bishme Cromarte, Mah Jing Wong and Project Runway winner, Dom Streater. Working on many projects with clients such as Chrisette Michele, Teyana Taylor, and Marsha Ambrosius, Michelle-Nichole continues to build her brand and grow as an artist meeting whatever challenges come her way.